Kunjan Garg hails from Ahmedabad and completed her undergraduate degree from the reputed School of Architecture at CEPT. While at school, the holistic academic environment allowed her to form gradually through active involvement in theatre, art and literature in addition to the inspiring guidance of reputed Studio tutors like Anant Raje, Kurula Varkey, Miki Desai and Neelkanth Chhaya. She was also fortunate to attend an Urban Studio under Prof Kenneth Warriner at the Rennselaer Polytechnic Institute New York in 2000 while being part of the CEPT International exchange programme.

She has worked with Ar Bijoy Jain at his Alibaug office and completed her student apprenticeship under Ar Kailash Pradhan in Gangtok. She has also assisted Ar Girish Dariyav Karnawat of GDK Designs Collaborative on the Bhopal Gas Tragedy Memorial Competition in 2004. Kunjan co-founded the firm Mangrove Architecture Alliance with batch mate Ar Raj Menon in the year 2006. The firm was awarded the Young Designer Award by the Indian Architect and Builder in 2014 and the IIA Kerala State Gold Leaf Award in Residential Architecture in 2014. Mangrove has also curated and facilitated content for The IIA Design Talks [2011-12], the IIA Young Architects’ Festival [2014] and have conceptualized the Living Monsoon program for the IIA Cochin Centre spanning the years 2015-17. In 2011, Mangrove amalgamated with ‘the Design Tree’ of Ar Niranjan Das Sharma to form RGB Architecture Studio, a critical practice that strives to articulate context sensitive architecture amidst emergent conditions.

Kunjan has been actively involved in architectural academics since 2016 and has been consistently striving to redefine the relationship between theory and practice as mutually complimentary.  In 2018, she conceptualized and introduced a new Foundation Programme at KMEA Kochi along with Ar Balu Joseph. The studio ran for 2 consecutive years and the team is now looking to revisit the structure and replenish them with feedbacks from past years to conceive an even more potent Seed Foundation Studio.  She is a voracious reader and an enthusiastic traveller and loves going back to the Himalayas. 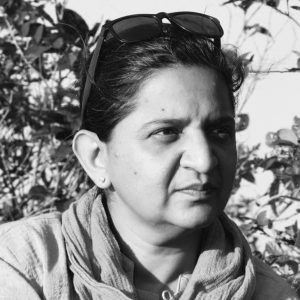