Piyush Pandya is an architect and urban planner who graduated from NIT Bhopal (2010) and CEPT University (2015) respectively. Piyush spent his early years in the small towns of Madhya Pradesh on the banks of the ancient and legendary river Narmada. The cultural landscape manifests in his architectural, urban planning and artistic approach respecting the cultural and environmental context, local aesthetics and stakeholders.

He carries the experience of more than 10 years in the academic and professional domains of architecture and design, cultural-based urban development, urban heritage management, tourism strategies and cultural documentation and research.  This includes his 5 year stint as Project Manager at the Centre for Heritage Management, Ahmedabad University. He has worked on projects that involved the European Union, World Wide Fund for Nature, AIGGPA (Bhopal), EDII (Ahmedabad), INTACH (Bhopal), Federal and State governmental offices, urban authorities of several Indian cities and innumerable additional stakeholders. He has taken additional training under Aga Khan Trust for Culture in India, Asia Pacific Heritage Education Network for Intangible Cultural Heritage in the Republic of Korea and Ministry of Housing and Urban Poverty Alleviation, Government of India in India. He has participated and was shortlisted in several architectural and urban design competitions.

​Piyush recently led the development of a successful grant proposal for ‘Heritage Grants to Engage Young People’ by the British Council in September 2020​. During this pandemic time, he ​served as a collaborating volunteer with community media organisation​-Drishti​, Ahmedabad where he was involved in research​, ​design, curation and hosting for two radio programme series- Shahernama (Story of the City) and City Tantra (City Systems​) ​focus​ing​ on building​ awareness on urban subjects. ​​

He has a deep interest in interdisciplinary art form and sees it as a​ political agency to engage and collaborate with the community. His work is showcased in various national and international platforms. Piyush along with two other co-artists, were shortlisted for the Seoul Biennale of Architecture and Urbanism 2021. Prior to that, he collaborated with renowned photographer Mitul Kajaria for Dehari- an art installation in exploring the relationship of a house and the city through space, poetry and photographs.

He likes to read, cook and travel. 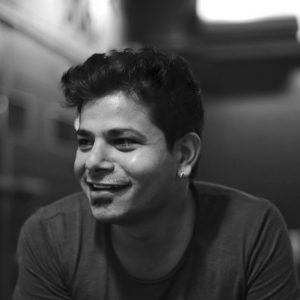