Rajasekharan Menon graduated with Gold Medal in 2002 from School of Architecture, CEPT Ahmedabad and has 15 years of experience in the field of Architectural Practice. Student days at CEPT where he received tutelage from several Masters of Indian Architecture was instrumental in shaping his perspective on Architecture and the built environment. The school also taught him the significance of holistic learning in Architectural education. His Undergraduate Thesis was on the Built form of Benares guided by Prof Neelkanth Chhaya.

His Experience in the field of Architectural Practice now spans almost two Decades having worked with Architects like TM Cyriac at Trivandrum and Kiran Pandya and PVK Rameshwar at Ahmedabad. In 2006 he Co-founded the firm Mangrove Architecture Alliance with batchmate Ar. Kunjan Garg. Mangrove won the Indian Architect and Builder Young Designer Award and IIA Kerala State Gold Leaf Award in Residential Architecture in 2014. Mangrove has curated and facilitated content for several path breaking events which has had a lasting impact on the Architectural psyche of the state such as the IIA Design Talks Series 2011 and the IIA Young Architects’ Festival 2014 hosting several International Architects and providing a platform for active discussions on the emerging scenario in the State. The firm also conceptualized the Living Monsoon program for IIA Cochin Centre spanning the years 2015-17 which was an attempt to find consistencies between different monsoon regions of the world. In 2011 he Co-founded RGB Architecture Studio with Ar. Kunjan Garg and Ar. Niranjan Das Sharma. Specifically involved at developing an architectural practice rooted in its context, and responsive to its contemporary conditions. The firm has won several awards and accolades for its context-sensitive designs.

He was part of the Jury panel for KVDF 2004 (Kurula Varkey Design Forum) which was led by Ar Channa Daswatte from Sri Lanka. Before assuming the position of Academic chair at seed he was visiting Faculty at AVANI Institute of Design, where he taught Architectural Design and has also been a regular reviewer at many institutions in Kerala. He Co-curated the World Architecture Festival CONNECT Series, Cochin which showcased significant Architects and projects from the city to visiting Architects from other parts of the country. RGB Architecture Studio is an invited participant at the upcoming travelling Exhibition titled TII: Architecture, scheduled for Winter 2020, involving 20 renowned firms in the country. 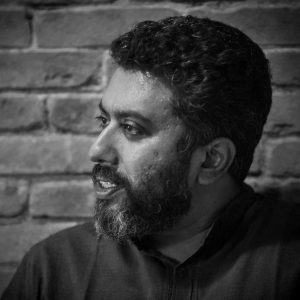