Neenu is an architect hailing from Kannur in Malabar with 7 years of professional experience in practice and academics. She describes the 12 years since joining TKM college of Engineering for undergraduate architecture as an invigorating journey in establishing herself as an independent and self-sustaining entity in her context, through critical observation, unfiltered reactions and consistent introspective analysis.

Training at the critically acclaimed Lijo. Reny Architects opened her up to the possibilities of architecture as a tool wherein expressing individual ideals in something as primal as built spaces cause a larger lifestyle movement in the mindset of Malayali households. After her undergraduate thesis, she joined the team of internationally acclaimed architect Sanjay Mohe in Bangalore. Over 3 years under the guidance of Mohe, she handled multiple projects diverse in scale and character. Even as the intent, context, and reasoning for each of these projects varied considerably, she was fascinated by how an architect’s personal experiences, convictions and his/her own history became an underlying, yet strong driving force for each of their projects. Fascinated by the idea, she set out to explore more on her own through volunteer work and extensive travel across India and south-east Asia.

These understandings were the guiding forces for her own practice, Studio 74051, launched in 2017 and furthermore during her tenure as an Assistant Professor at KMEA, COA Cochin. Since 2017, her office has been managing a number of projects, throughout Kerala, and has been keenly documenting and analyzing her responses to each client and site to further her research. Simultaneously her experiences in KMEA as a core studio faculty and teacher of History under-seasoned academicians added considerable depth to her quest. As in-charge of History of Architecture for First and Second Semesters, she was able to formulate a comprehensive introduction to architecture through the history of humankind, as its reactions to a set of four primary stimuli; death, language, civilization and authority.

At seed, she hopes to further this study on history, its effect and relevance on the individual and his architecture. 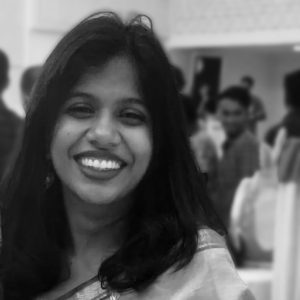